There is a new breed of ninjas in the north after Ashdale Secondary College launched CoderDojo North over the weekend. Thanks to Curtin University, Bankwest and the Autism Academy for Software Quality Assurance (AASQA), CoderDojo North is ready to motivate coding ninjas to be innovative creators of technology.

“It was great to see such a range of community partners coming together to start yet another Dojo in the community. The launch was attended by senior members across business, the AASQA academy and universities. Without this teamwork and band of volunteers, Dojos just wouldn’t exist!”

Coding is a tool that lets you write your story with technology. It is how humans talk to machines and an increasingly important skill for current and future generations.

“In Australia today, 87% of jobs demand digital skills, so it’s really important that we equip our youngsters with knowledge about coding and computers. Already, Ninjas at current AASQA Dojos are being linked up with paid internships and then ongoing roles, going to show that employers are really looking for candidates with these skills.”

CoderDojo North is dedicated to students with autism, working to build their strengths for future training and employment opportunities. At the Dojo (coding club), Ninjas (students aged 12-18) will work on code-related projects such as websites, apps, game development and more, with the support of volunteer Mentors from Edith Cowan University (ECU) and Curtin University

Lainey Bradley is Champion of CoderDojo North and mother to a child with Autism who has shone since he started coding.

“My son has been a part of CoderDojo WA since July 2017 and has exceled in his IT and coding skills.  He knows what career path he would like to take and to have the support of Ashdale Secondary College, Professor Tan (AASQA) and Dr Cook (AASQA), I know that he will realise his dream job. At long last we, as parents, have hope for the future of our loved ones leaving school and going out into the community armed with the skills to be a success.” 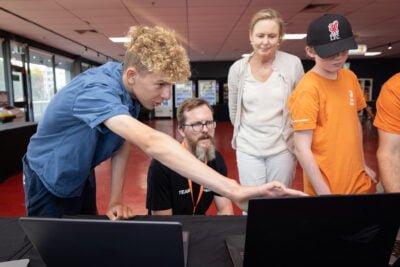